Foreign policy, the threats and crises we currently face, and the importance of good policymakers. 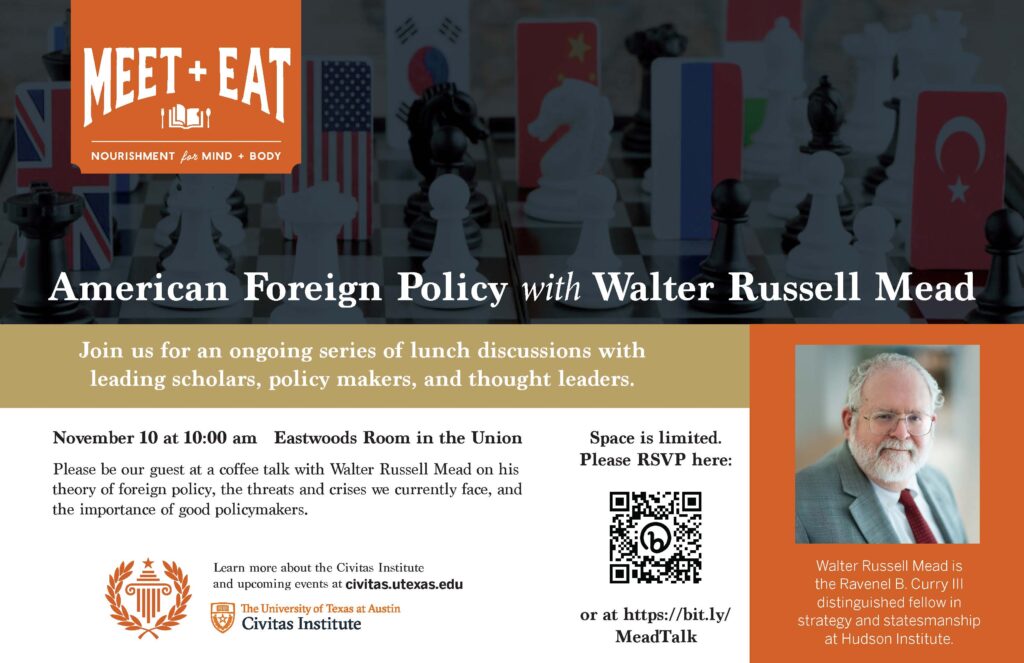 Walter Russell Mead is the Ravenel B. Curry III distinguished fellow in strategy and statesmanship at Hudson Institute, the James Clarke Chace professor of foreign affairs and humanities at Bard College, and the “Global View” columnist  at the Wall Street Journal. From 1997 to 2010, Mr. Mead was a fellow at the Council on Foreign Relations, serving as the Henry A. Kissinger senior fellow for US foreign policy from 2003 until his departure. He is a member of Aspen Institute Italy.

His book, Special Providence: American Foreign Policy and How It Changed the World (Alfred A. Knopf, 2004), was widely hailed by reviewers, historians, and diplomats as an important study that will change the way Americans and others think about American foreign policy. Among several honors and prizes, Special Providence received the Lionel Gelber Award for best book in English on international relations in 2002. In 2012, the Foreign Policy Research Institute awarded him its Benjamin Franklin Prize for his work in the field of American foreign policy.

Mr. Mead’s book, God and Gold: Britain, America and the Making of the Modern World (Alfred A. Knopf, 2007), is a major study of 400 years of conflict between Anglophone powers and rivals ranging from absolute monarchies like Spain and France through Communist and Fascist enemies in the twentieth century to al-Qaeda today. The Washington Post and the Economist listed it as one of the best books of the year.

His most recent book, The Arc of A Covenant: The United States, Israel, and the Fate of the Jewish People (Alfred A. Knopf, 2022), is a bold history of the US-Israel relationship that examines the origins of American support for Israel and the relationship’s impact on past, present and future US policy. Mr. Mead discusses, among other things, the forgotten history of left-wing support for Zionism, the foundation of the state of Israel, the myth of the “Israel lobby” and the rise of the Sunbelt coalition in US politics.

Mr. Mead is an honors graduate of Groton and Yale, where he received prizes for history, debate, and his translation of New Testament Greek. He has traveled widely in the Middle East, Asia, Europe, Africa, and Latin America, and often speaks at conferences in the United States and abroad. He is a founding board member of New America, and also serves on the board of Aspenia. He is a native of South Carolina and lives in Washington, DC.